To use or not to use video clips in sermons

A quick blog post and back to work ... why the "need"? Because it is something I am wrestling with ...

Saw this headline on Out or Ur: John Piper says video hurts preaching


Everyone knows that John Piper believes in the supremacy of preaching, but what about augmenting the spoken word with video clips or dramas? In this short video Piper answers that question. Here's an excerpt:

"I think the use of video and drama largely is a token of unbelief in the power of preaching. And I think that, to the degree that pastors begin to supplement their preaching with this entertaining spice to help people stay with them and be moved and get helped, it's going to backfire.... It's going to communicate that preaching is weak, preaching doesn't save, preaching doesn't hold, but entertainment does."

Piper concludes as only he can--by making light of the issue with laughter while still invoking the possibility of eternal damnation. He says:

"Nobody is going to go to hell because of this...in the short run."

In front of me right now is a letter from CCLI (Christian Copyright Licensing International) asking me to register for a Church Video License. I got it last week but am not even sure I want to bring it up to my church leadership. (I asked them what they thought of it last year, and we decided not to get a license and add on to the fees we pay for our use of Chrtistian songs in worship.

Have you considered using film clips in your sermons to illustrate a point?

I recently saw a film clip where a monkey gets stuck in a lift in an exclusive hotel with a full fruit basket. The outcome is hilarious, and I talked about this film to friends for days afterward.
Incredibly funny films come along once in a very long time - you know, the ones that keep you chuckling for days? Try as you might, you just can't explain the situation to others and make it as funny as it actually was in the film, so you end the conversation with "You'll just have to see it for yourself!"

Film clips today are being used extensively to illustrate a message or highlight a teaching point and can be remember long after just verbally telling it. Why not show a few of those films to your congregation this year?

Over 23% of all churches registered with CCLI currently hold a Church Video Licence, enabling them to show movies for congregational fellowship events, women's and youth ministry outreach events, and in their children's programs but to name a few uses. They also have access to Screenvue.com a database of illustrations showing how to use film clips in sermons and talks.

Consider joining those churches that have discovered the convenience of having a Church Video Licence and the benefits of Screenvue.com. For one low annual payment the Church Video Licence gives you access to thousands of films across a variety of genres. Complete and send the application form on the reverse of this letter along with payment to start using films legally within days.

When churches come together under a group licence, CVLI can offer discounts on annual licence fees. If you are interested in the Church Video Licence, why don't you give our office a ring to find out if there is a group licence your church is eligible to join? Group licenses are also available for our other licensi 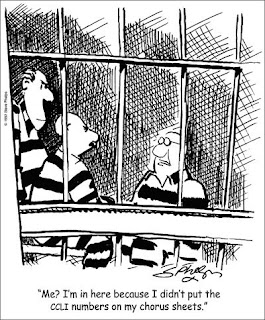 You can ring our office on ________________and one of our friendly customer service representatives will be more than happy to answer any questions about the Church Video License and group licensing that you may have.

Why my hesitation? What's my struggle? First is whether this is money well spent. Second is whether it is something I want to do. Will this really help my congregation? Will it be something that will end up being expected? Is it as John Piper puts it "a token of unbelief in the power of preaching?"
Or is it just a comfort zone thing or my older age (yup getting older) idiosyncrasies just acting up where I am not ready to adapt to a new cultural setting?

BTW, I have used youtube videos before (worship) as have others and some speakers have used film clips (free usage promotional ones like the "Amazing Grace" movie). I am for using creative art forms in worship and evangelism. I have been involved in acting in skits and even a long (over an hour) evangelistic drama ..., I enjoy using "object lessons" and of course I am a "Gospel Entertainer" ... but then again, there seems to me to be something "sacred" about the proclamation of the Word via preaching.

Have I already "compromised" by my use of ppt? I wonder what Jesus or Paul would have done if they walked this earth in this 21st century.
Posted by Paul Long at 12:49 PM