All God's creatures got a place in the choir


For the 24 February bulletin

I am leading worship this morning and will be playing a video during service.  The lyrics of the song in the video can be found below. It is a song by a group called Celtic Thunder.

All God's creatures got a place in the choir,
Some sing low and some sing higher,
Some sing out loud on the telephone wire,
Some just clap their hands or paws or anything they got, now.

Listen to the top where the little bird sings,
And the melodies, and the high notes ringing,
And the hoot-owl cries over everything,
And the blackbird disagrees.

The dogs and the cats, they take up the middle,
Where the honeybee hums, and the cricket fiddles,
The donkey brays, and the pony neighs,
And the old gray badger sighs.

Listen to the bass it's the one on the bottom,
Where the bullfrog croaks, and the hippopotamus,
moans and groans with a big to do,
And the old cow just goes moo.

It's a simple song, a little sung everywhere,
By the ox and the fox and the grizzly bear,
The dopey alligator and the hawk above,
The sly old weasel and the turtledove.

All God's creatures got a place in the choir.

For the 17 February bulletin

The season of Lent began today (at the time of writing this) with Ash Wednesday which happens to fall on 13th February. But I would suspect that for most of us, the more significant date that we would remember is the next day, 14th February, Valentine’s Day. (In all fairness, though, Ash Wednesday falls on different dates each year).
It struck me this morning that Ash Wednesday and Valentine’s Day do have something important in common. The connection may seems a little off tangent but let me try to explain.
Ash Wednesday begins a 40 day period of prayer and fasting to remind us of the frailty of our humanity and the need to repent of our sins. It points us to the fact that we have an avenue for forgiveness because of what Christ has done for us on the cross. The cross while a reminder of the gravity of our sins that required Christ to suffer and die, is also at the same time a celebration of Christ’s love for us.
Valentine’s Day (ahem … not a Christian celebration, but that’s ok :-)) is to some an enjoyable day where people celebrate their love for each other. But for others, it is dreaded day because it can end up a harsh reminder that they are not loved by the one they hope would love them (for example, when the “would you be my Valentine” request is turned down) or they have yet to find that “special someone”. For others it is a burdensome day trying to find that elusive “perfect gift” or “perfect activity” that meets the expectations of their significant other, or the one they hope will become their significant other (you put in your own example).
Ok, here’s the connection. Both days are in the end about the human need for love and acceptance despite our frailties. The former, Ash Wednesday wisely focuses on God and His love in the midst of our sins and insecurities. The latter, Valentine’s Day often focuses on human love which is clearly inadequate.
Consider the traditional OT choice for the Ash Wednesday lectionary reading: Joel 2:1-2, 12-17. In the midst of the very graphic prophecy of God’s judgment on a sinful people is the reminder of God’s love in verse 13:
Rend your heart and not your garments. Return to the LORD your God, for he is gracious and compassionate, slow to anger and abounding in love, and he relents from sending calamity.

So if you observe the period of Lent, keep in mind as you reflect on your sins and inadequacies that God is gracious and loving. The whole point of Lent is not to beat yourself up but to realize the seriousness of your sins and need for repentance, then and go to God to experience His forgiveness and rejoice!
And if you had a bad Valentine’s Day, remember that what is more important is that God loves you! And even if you had a wonderful romantic Valentine’s Day, remember that true love comes from God. (1 John 4:16:  God is love. Whoever lives in love lives in God, and God in him).
Posted by Paul Long at 11:44 AM No comments:

Sent to me by a Jewish joke list.
I found it very funny but also make me a little envious
And then a little rebuked about my workaholic tendencies ... 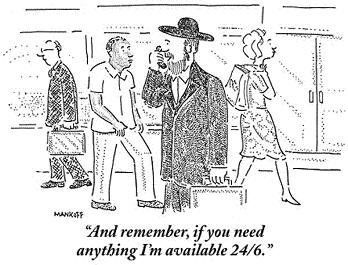 
Another insightful quote by Henri Nouwen ...

We often confuse unconditional love with unconditional approval. God loves us without conditions but does not approve of every human behavior. God doesn't approve of betrayal, violence, hatred, suspicion, and all other expressions of evil, because they all contradict the love God wants to instill in the human heart. Evil is the absence of God's love. Evil does not belong to God.

God's unconditional love means that God continues to love us even when we say or think evil things. God continues to wait for us as a loving parent waits for the return of a lost child. It is important for us to hold on to the truth that God never gives up loving us even when God is saddened by what we do. That truth will help us to return to God's ever-present love.

Rachel Campos-Duffy, a blogger on the Today Show’s “Moms” site, described Monday how watching the Super Bowl like millions of other families turned into a “parenting challenge” when the halftime show began.

That’s putting the performance of Beyonce and her similarly half-dressed dancers mildly. The hyper-sensual show left Mrs. Campos-Duffy’s kids with a quizzical look on their faces. The eight-year-old simply said, “She looks weird.”

If only all our kids were so confused. But sadly, so many of them are thoroughly familiar with sexuality packaged as music and performance. As Campos-Duffy wryly observed, “I half-expected a stripper pole to pop out of the platform, which was actually staged to look like a peep show.” Well, the commercial for the CBS sitcom “Broke Girls” that immediately followed half-time featured just that—a stripper-pole.

I mean, this was the Super Bowl, for cryin’ out loud. CBS and the NFL knew very well children and families would be watching. And what they gave America with this performance and many of the commercials was another chapter in the ongoing sexualization of American culture—and of our kids.

And honestly, Beyonce’s salacious performance was pretty tame compared with what we might have expected from other performers, and not just the female ones. This is what our culture throws at young people every single day. And despite calls to protect kids from nearly everything else, we pretend overt sexualization will magically have no consequences at all.

In the name of our sacred sexual appetites, it’s as if we no longer consider quaint concepts such as “public decency” or that some fare may not be “appropriate” for children.

This is not just an American problem, either. British Prime Minister David Cameron recently appointed a special adviser on the commercialization and sexualization of childhood after some horrific incidents involving the sexual pressuring of junior high-schoolers.

But it’s more than isolated incidents. This is an unfettered, out of control social experiment, and the guinea pigs are our children.

As Cole Moreton, a mother and columnist for The U.K. Telegraph said, “We need more research, the experts say. But to a dismayed parent, it seems like the horrific result of a massive experiment. Thanks to the Internet, our boys and girls are the first children to grow up with free, round-the-clock access to hardcore pornography.”

And they cannot handle it. Nor should we expect them to. It’s immoral. As my friend Tom Gilson wrote recently in an article on BreakPoint, ethics require informed consent from the subjects of social experimentation. But in our culture, adults—in the sacred name of absolute, unfettered “sexual freedom”—force young people, who have no say in the matter, to go along. For the life of me, I cannot see how it’s anything less than child abuse.

One church-run preschool in California recently shut its doors after parents discovered four- and five-year-old students performing sex acts on one another. Where do you think they learned this? Josh McDowell tells me that first exposure to pornography is now common for six- and seven-year- olds.

This is a social justice issue. And to the hipster Christian writers so concerned with social justice who celebrated Beyonce’s performance as “empowering women,” shame on you. Beyonce is unbelievably talented. But using sexuality for power is not a triumph for feminism. It only leads to the objectification and victimization of women, especially young ones. I will tell you that wives, watching their husbands watch Beyonce, weren’t empowered.

Parents, like it or not, this is our culture. Julie Heramine, my recent guest on BreakPoint this Week, offered very helpful guidance from her book “Guardians of Purity.” Come to BreakPoint.org, click on this commentary. We’ll link you to the show and her book.
Posted by Paul Long at 11:22 AM No comments:

For those who missed our family camp, the theme the camp committee chose was “Families are built not born”. While we are born or adopted into a family, the purpose of the theme was to remind us that there is a difference between being part of a family and feeling a part of a family. 2 days of working, playing, talking, worshipping, learning, relaxing and eating together (and for some of us snoring together), really did help many of us feel like a big family.

As we reflect on how to nurture and develop giving hearts (to build family / community), here’s some thoughts on family from Genesis 47:28-50:26 (which I have paraphrased from an article by Rabbi Shraga Simmons).

Most creatures in the world have parent-child relationships but only the human being has a concept of grandchildren, of perpetuation beyond a single generation. This is an effect of our spiritual soul which is rooted in infinity. Being a grandparent therefore connects us deeply to our uniqueness as human beings.

There is further significance to Jacob's blessings. One of the most beautiful customs in Jewish life is for parents to bless their children at the start of the Friday night Shabbat meal. Girls receive the blessing: "May God make you like the matriarchs Sarah, Rebecca, Rachel and Leah." Boys, meanwhile, are blessed "to be like Ephraim and Manasseh." Why were they chosen instead as the subjects of this important tradition, rather than Abraham, Isaac and Jacob?

According to classical Jewish commentators, it is because Ephraim and Manasseh were the first set of Jewish brothers who did not fight. Abraham's two sons, Isaac and Ishmael could not get along, and their disagreement forms the basis of the Arab-Israeli conflict until today. The next generation of Isaac's two sons, Jacob and Esau were in constant conflict and Esau even repeatedly sought to kill Jacob and instructed his descendants to do the same. And even the next generation of Jacob's sons sold Joseph into slavery in Egypt.

Ephraim and Manasseh represent a break from this pattern. In giving his blessings, Jacob purposely switched his hands, blessing the younger Ephraim before the older Manasseh to emphasize the point that with these siblings, there is no rivalry. (see Genesis 48:13-14)

It is with this thought that Jewish parents bless their children today because there is no greater blessing than peace among brothers. The words of King David in Psalm 133:1 ring true:  How good and pleasant it is when brothers live together in unity!


May this be our experience as KCC  – no rivalry and pettiness bur rather peace, love and grace as a multi-generational family.